Peacebuilders from around the world came together before the 2022 Rotary International Convention not only to reflect on Rotary’s extraordinary response to conflict this year, but to strongly reinforce our commitment to creating environments where peace can flourish.

The Rotary Presidential Conference Houston: Serve to Bring Peace, 3-4 June, began with recognition of Rotary’s support for peace in Ukraine and emphasized the effect that Rotary’s vast network has had in providing rapid humanitarian relief in the country and to millions of people who have fled their homes.

Rotary General Secretary and CEO John Hewko, whose parents were born in Ukraine, spoke during the opening session about Rotary’s Disaster Response Fund and how donors swiftly contributed more than $15 million to provide Ukrainians with water, food, shelter, medicine, and clothing.

“In the midst of this terror, destruction, and loss of life, we see extraordinary acts of kindness, humanity, and dedication,” Hewko said. “And this gives me, and I hope each one of you, great optimism for our great organization and for our future.”

Hewko’s parents emigrated to the U.S. state of Michigan after World War II. His father, Lubomyr “Lu” Hewko, joined the Rotary Club of Clarkston, where he organized several projects to help Ukrainians. After Ukraine declared its independence in 1991, Lu Hewko helped charter the first Rotary club in the capital, Kyiv. John Hewko, a charter member of that club, lived in Ukraine in the 1990s and helped draft the country’s new constitution.

Following Hewko’s remarks, Myroslav Gavryliv, a member of the Rotary Club of Lviv, Ukraine, spoke about how clubs in the country have mobilized to coordinate incoming relief supplies and how members are assisting their neighbors. He was among several Ukrainian members taking part in the convention.

This was the capstone of six presidential conferences around the world and gave participants a chance to network with other peacebuilders and hear from people who are engaged in peacebuilding in many different ways.

ShelterBox CEO Sanj Srikanthan discussed how Rotary and ShelterBox, which are partners in providing disaster relief, work together in responding to crises of all kinds.

Azim Khamisa, an author and activist, spoke about founding the Tariq Khamisa Foundation after his son was killed by a gang member in 1995 while delivering pizzas. The foundation is driven by the principles of restorative and social justice to help people choose forgiveness and compassion rather than revenge and bitterness.

Other speakers included Dr. Gary Slutkin, the founder of Cure Violence Global; Julia Roig, the founder of The Horizons Project; and Kiran Singh Sirah, a past Rotary Peace Fellow and president of the International Storytelling Center.

The Rotary Peace Fellowships allow up to 130 dedicated leaders a year to train to become effective catalysts for peace. The Rotary Positive Peace Academy, created in partnership with the Institute for Economics and Peace, introduces people to the framework of peace being more than just the absence of violence.

Peace is a cornerstone of Rotary’s mission and is inherent in all the work that our organization does, said Celia Cruz de Giay, chair of the presidential conference in Houston and a past Rotary International vice president.

At the closing session of the peace conference, Rotary International President-elect Jennifer Jones joined the chief executive of UNICEF USA, Michael Nyenhuis, in announcing a partnership to empower girls. The issue has been one of RI President Shekhar Mehta’s presidential initiatives and will remain a focus for Jones. 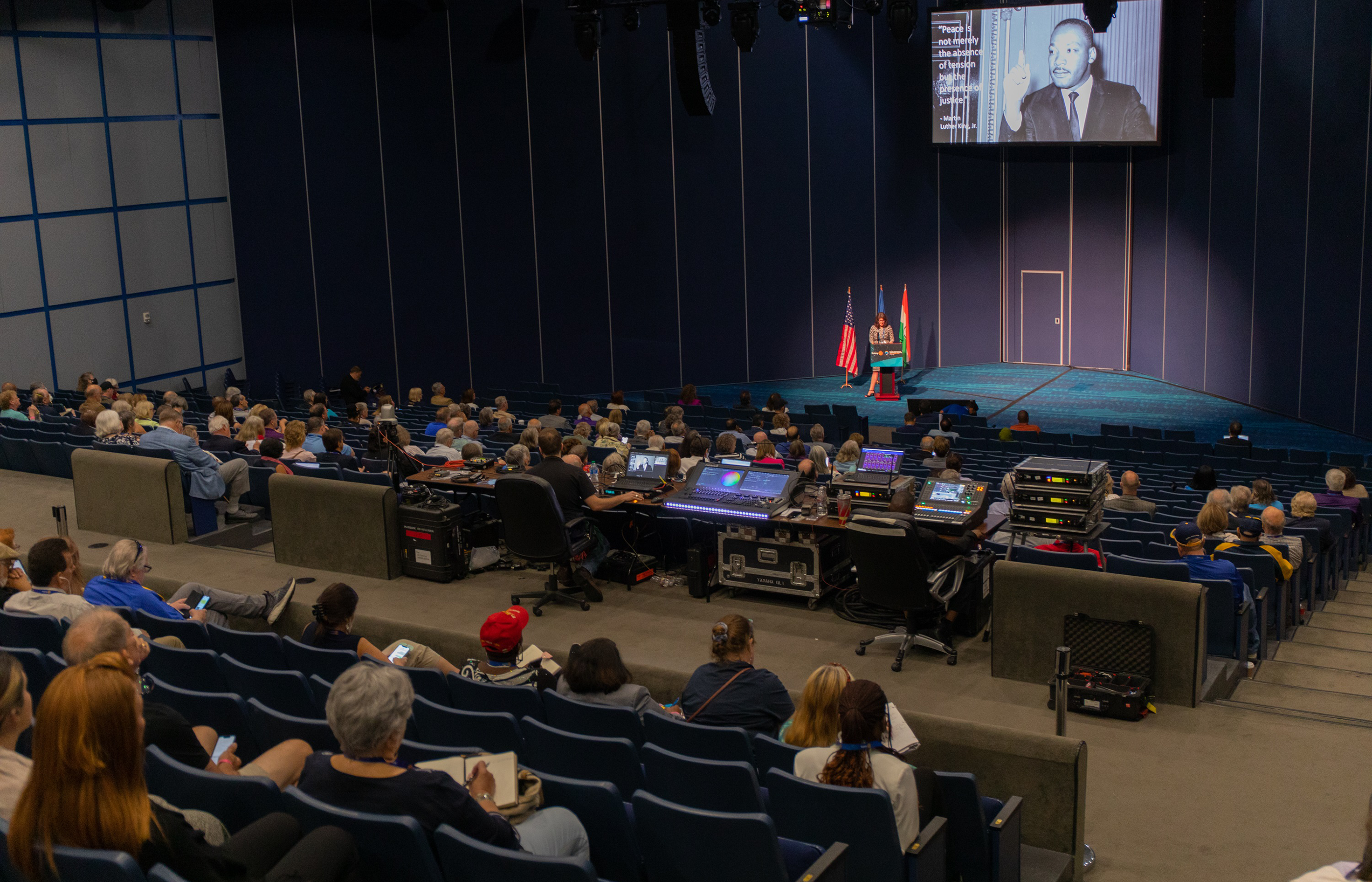